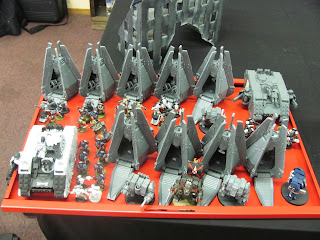 So  I headed down to Kenallville IN, to Sinclair Books and Games for the Semi-Finals round of 'Ard Boyz  this weekend. Nate joined me to just come and hang out (and get drunk at the pub across the street.) Anyway, here's a brief rundown of how my day went.


First off I was running Blood Angels. It was kind of a gimmicky army to begin with involving 9 drop pods, 5 dreadnaughts and 2 LR Redeemers. It is a very fun list, and one that I thought I might be able to catch a few people off guard with. Heres a quick rundown of the list.

HQ: 2x Librarians with Shield of Sanguinius and Unleash Rage

Basic idea of the list was to get 5 dreadnaughts in their lines on turn 1, use Multi-Meltas and Blood Lances to pop as many transports as possible and force them to deal with that while the rest of the force deepstrikes in without scattering from the beacons (Land Raiders may deploy based on opponents army list and deployment.) The Assualt squads inside the Redeemers are enhanced by the Librarians Unleash Rage giving them the Preferred Enemy USR, and the Sang priest giving them FNP and Furious charge. These really are pretty mean units btw.

Anyways on to the games.

Game one found me up against a Codex Marine Shrike list with 2 full squads of TH/SS Terminators and another squad of 7 or so Lightning Claw Terminators in a Land Raider Crusader joined by a Chaplain, a full size assault squad (joined by Shrike) a Scout Squad with Sniper Rifles and a ML, a Tactical squad with ML and a 4xML Devastator Squad.

I won the roll to go first and passed it to him. He deployed everything but the Assualt Squad and Shrike. He combat squaded both the Scouts and Tacticals, 'scouting' with one of the scout squads by one of the objectives. The TH/SS Terminators he deployed aggressively towards the front of his deployment zone. The Tac squad was deployed in/around a building with one combat squad on top of it and the other behind the building, and the other 1/2 of the scouts and the devastators were set up on a 'landing platform' looking peice of terrain.

With nothing that could really threaten my Redeemers at range I decided to deploy them in this game and put them each next to one of the buildings in my deployment zone.
In his turn he moved all the TH/SS termis up and ran with them as well (getting a 1 for each roll!) He also moved his LR up. He fired all his ML's and the Multi-Melta on the Crusader (which was out of melta range) but all pinged harmlessly off of my Redeemers.
In my turn I dropped in all 5 dreadnaughts, I blew up his Crusader, and killed 2 of the scouts he put near one of the objectives, and killed all but the sgt. of one of the tactical combat squads.
In turn 2 he killed one of the furiosos, and immobilized one of the regular dreads. He was once again unable to touch the Redeemers.
In my turn 2 I dropped in an assualt squad near one of the objectives, dropped another one near the landing pad, and my assualt squads both disembarked and combined with a few casualties caused by the Flamestorm cannons they both assualted one of the TH/SS termi squads and wiped it out. I got really crappy massacre rolls though. The remaining Furioso used Wings of Sanguinius to move towards the landing platform to engage the scoust and Devs, but wasn't able to get close enough to assualt.
In his turn 3 the lightning claw terminators moved out of the crater that used to be their LR and multi assualted both of the squads that wiped out the TH/SS termis. (Stupid crappy massacre rolls.) He wiped out one squad completely, and killed the sang priest from the other one. The remaining squad fell back 10 inches (more on this later.) His remaining TH/SS termis assualted and destroyed one of my regular dreadnaughts.
My turn 3 saw a squad of assualt marines come down and kill the remaining scouts near the objective, I finished off the sgt. from the combat tactical squad. The furioso moved up and killed a couple of scouts and on of the devastators with his heavy flamer and blood lance, them moved in and finished off the scout squad in assualt. The Assualt squad that had fallen back moved up and charged the Lightning claw squad (there was only 1 + a chaplain left!) and wiped them out, consolidating up behind their Redeemer.
In his turn 4 Shrike and the assualt squad finally came in from reserves for him and they moved on using outflank to come on to his left. This brought them within Flamer Range of the Assualt Squad of mine that just finished off the scout squad near the objective on my side of the table and he wiped them out in shooting.
The devastators and Tactical squad opened fire on the remaining furioso and managed to destroy it.
As my turn 4 started we only had a few minutes left, but that was all I needed. I moved on assualt squad onto the objective on his side of the table, Moved and ran another onto the one in the center of the table and the Redeemer squad embarked back into their LR and moved over to claim the one on my side of the table giving me what I thought was a massacre win. We broke for lunch with me feeling pretty good and wondering what my next game would bring. When I got back to the store though they informed me I had been knocked down to a major win. Remember when that assualt squad fell back from the lightning claw termies, well I used combat tactics to do so, it turns out Blood Angels do not have Combat Tactics and since that squad was controlling one of the objectives they decided to take that away from me and thus I only got a major win. What really sucks is that I would have needed to roll a 2 or 3 to pass the leadership test anyways so I probably didn't even need to use combat tactics to fail it, I just wanted to take any sort of insane heroism out of the question and I didn't know that BA's didn't get Combat Tactics.

Game 3 had me matched up against Fatecrusher deamons. Fateweaver, a Blood Thirster, 3 MoT Deamon Princes with bolt of Tzeench, 3x 4 Blood Crushers with Icon and Musician, 4x 8 Bloodletters and 1x 8 Plaugebearers.

I am not going to go into a full blow report like the other two games, suffice it to say that that many monstrous creatures with re-rollable invul saves was about as bad a matchup as I could ask for. I did manage to kill one unit of blood crushers, all the blood letters, one DP and fateweaver, but he killed pretty much all of my army save a few drop pods and the land raiders. Giving him a lopsided massacre win.

So to sum things up, The day started off well and then went downhill from there. There are a couple of notes I would like to make at this point.

First off I would like to say I thought Hite at Sinclair did a good job running the event. I was bummed to have my massacre knocked down to a major, but he could have easily disqualified me entirely. As such taking away the objective the offending unit controlled was IMO quite fair.

Second, I accidentally brouth the wrong copy of my army list, and this proved to be huge. I had two versions of the list made up. In one the Furiosos had might of heroes (+d3 attacks) and blood lance while the regular librarians had Unleash rage and Sword of Sanguinius. This is what I expected to have, but when I got to the store and went to hand my list to my opponent I discovered I had wings on the libby dreads and shield on the regular libbies. Turns out in game 2 the sword of sanguinius could have been really usefull for getting rid of his LR that kept my Redeemer trapped in the corner all game long (the other one might have put up a bit more of a fight against the TH/SS termis before going down if he had the might of heroes.) In game 3 the might of heroes would have been huge since I had one of the furiosos locked in combat with a DP since turn 2. He couldn't manage to blow me up, but I was constantly knocked down to 1 attack and those extra d3 attacks would have been helpfull. I don't think that would have been enough to turn things in game 3, but having the sword in game 2 could have been a game changer if I had been able to take out his LR!

Also, Nate helped me to put together this list and all the models, we didn't finish putting things together until friday night and only had about 1 and 1/2 games of practice with it. This hurt as I didn't really know the army very well (as evidenced by not knowing they don't have Combat Tactics in game 1) but also we didn't have time to discover and correct any of the weaknesses in the list.

That said it was a fun list to play. The combination of the assualt squads in the LR's accompanied by the Librarians and sang priests makes for a pretty mean combo. In fact it was so fun I am still contemplating tweaking it some and taking up Blood Angels.
All three of my opponents were nice guys and fun to play against. There was no friction between me and any of my opponents all day (came close when I called my third one on deepstriking a unit of bloodletters within 1 inch of one of my units, but he recovered well and the rest of the game moved on without incident) I wish I had done better, but I did have fun and I guess that's what the game is really all about in the end, so no complaints. 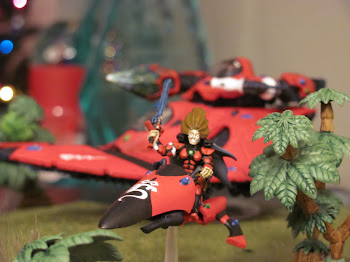